Faizabad or popularly known as Saket Faziabad is well-known for its rich heritage and culture. All the Nawabs who ruled this city since centuries took efforts to develop this city. Faziabad was the old capital of Awadh. Hence, all the Nawabs of Awadh ensured that Faizabad stayed as one of the most flourishing city at those times. With this common vision on mind they made many worth watching monuments in the city. The city was in its flourishing stage during the time of Nawab Shuja-ud-Daula. He ensured that Faizabad becomes a flourished city by building beautiful gardens, palaces and other monuments. Nawab Shuja-ud-Daula was married to Bahu Begum or popularly known as Begum Unmatuzzohra Bano. Bahu Begum ka Maqbara is one of the places of tourist attraction built in her memory. 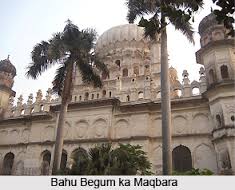 Bahu Begum was the wife or Begum of Nawab Shauja-ud-Daula. Bahu Begum ka Maqbara is also known as tomb of Queen Begum Unmatuzzohra. The beautiful tomb was built in 1858 in her memory.

Bahu Begum was widow of third Nawab of Awadh, Shauja-ud-Daula. She married him in 1743 and was living in Faizabad. She was residing in Moti Mahal. Bahu Begum was one of the Begums in Faziabad who was given the most dignity and respect. Mostly the monuments in Faziabad are attributed towards her. She was concerned for the welfare of the people. She lost life in 1816. After her death, the city of Faziabad took a u-turn in its development. The construction of this tomb was a result of a treaty between Bahu Begum, British government and Nawab of Awadh. As per the treaty it was decided that out of the huge treasures of Bahu Begum an amount of Rs three lakhs would be kept separately in order to build this monument after the death of Bahu Begum. This responsibility was given to Bahu Begum’s chief advisor Darab Ali Khan.

After the death of Bahu Begum on 27th January 1816, Darab Ali Khan laid the foundation of this magnificent building. However, work came to a stand still in 1818 after the death of Darab Ali Khan. Panah Ali, Vakil and Mirza Haider the three sons of the adopted daughter took ahead the work and finally the work of Maqbara was completed in 1858. It is also believed that father of Umrao Jan was working here as ‘Jamadar’. The entire construction of Maqbara was done with utmost detail. The marble used here is almost two hundred years old and is still shining. This 42 meters high tomb gives a magnificent view of the entire city. It is a moment to capture.