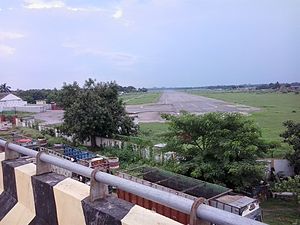 Faizabad city transport system is well facilitated by the Faizabad airport which is sited amidst the national highway 28 and national highway 96 which makes it much easy to reach the airport from any part of the city and from the airport to any part of the city without hassle. The airport is located exactly at Sultanpur Naaka. It is elevated at the height of 335 feet above sea level which is about 102 m and it has its co-ordinates at 26°45'04 North latitude and 082°09'18 East longitude. The Faizabad airport serves as a domestic airport to both Faizabad and Ayodhya which are located very next to each other. As a domestic airport it operates flights within India, connecting Faizabad easily with all parts of the nation. The airport is owned and operated by Airports Authority of India.

The main reason for the denial is to provide free lands to Airports Authority of India (AAI) though the Aviation Ministry has continuously requested the state government to grant permission to the AAI with free land to develop the Faizabad domestic airport. The Aviation Ministry reported that if the state government offer free land and agreement to AAI to operate 8 airports in the state, which also includes Faizabad, it will provide employment to a huge number of employees in Faizabad and the other neighbouring cities like Moradabad, Meerut and Saifai apart from benefiting the tourists and travelers.

The UP government had signed a MoU in February 2014 with the AAI to develop the infrastructure of Faizabad domestic airport as a low cost airport smaller airport in Uttar Pradesh by providing additional land for the construction of terminal from the national highway along with 7 other domestic airports in UP. Space and parking of private aircrafts in Faizabad airport is chargeable to the state government of Uttar Pradesh.

Explore more about Transport in Faizabad