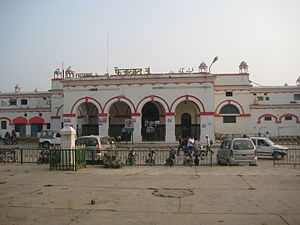 Initially, the railway belonged to the Oudh and Rohilkhand Railway fare zone, but at present it operates under the Northern Railways fare zone with the junction at Lucknow. The station is located on the Allahabad-Faizabad railway line. The station has a single track for train in a platform; there are a total of five platforms in the station. The station connects both the national capital Delhi and the state capital Lucknow apart from major cities in Uttar Pradesh like Allahabad, Kanpur, Jhansi, Varanasi and Gorakhpur, these cities can be reached from Faizabad in about 4 to 6 hours train journey.

The main facilities of the Faizabad junction railway station are Baggage room, 24 hours ATM within station premise, Snacks-cum-refreshment canteens, waiting room, Retiring or dormitory room. The station also has parking area for four wheelers, two wheelers and a separate parking lot of bicycles. Within the city Faizabad railway station can be easily reached as it is located amidst the Faizabad central bus station, auto rickshaw stand and the taxi stand, this factor also favours the passengers from the station to reach any part of the city without much hassle. One of the main facilities that have to be included in the station is baggage check.

The Faizabad Delhi express (FD DLI EXP) train operates on all seven days in a week and it runs between Faizabad city and old Delhi with station stoppage at Lucknow, Shahjahanpur, Bareilly, Rampur, Moradabad, Hapur and Ghaziabad.

The Saket express train runs between Faizabad city and Mumbai city through Pratapgarh and Sultanpur, it operates twice a week. The Faizabad Superfast express also connects Faizabad city with Mumbai, it operates only one a week and it connects Akbarpur, Shahganj, Jaunpur, Zafarabad, Janghai, Allahabad, Manikpur, Satna, Katni, Itarsi, Jalgaon, Nasik and Kalyan.

The Faizabad junction railway station is also located amidst many popular and quality hotels. Majority of the hotels are sited within the city and the neighbouring city Ayodhya. The most popular hotels are Hotel Krishna Palace, Akash yatri niwas, Hotel Shane Avadh, Tirupati Hotel, Hotel Nitya, Shukla Bhojanalay, Abha hotel and Hotel Amber.

Explore more about Transport in Faizabad