Faizabad, old capital of Awadh has very fascinating monuments built by the emperors which are worth noticing. Each of the Nawabs who ruled this city ensured that the city was well developed in terms of infrastructure and other facilities. With this vision in mind, Faizabad today has a large variety of historical monuments which mark as a rich culture heritage for the country. One such beautifully made monument by the Nawabs is Gulab Bari. 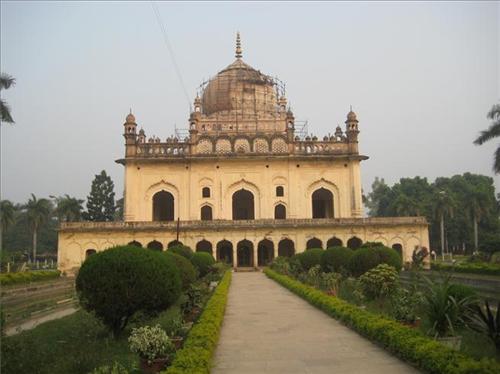 Gulab Bari according to its meaning it is known as ‘garden of roses’. This is the famous tomb of Nawab Shuja-ud-Daula, third Nawab of Awadh. This tomb is popularly known as Gulab Bari as it has a variety of roses around it. The tomb is designed in such a way that it has a breathtaking view of the variety of roses and the water fountains.

History of Gulab Bari in Faizabad

Nawab Shuja-ud-Daula was the third Nawab of Awadh. During his tenure as the Nawab of the city, he made Faizabad as the capital of Awadh. After making Faizabad as the capital, he also took efforts to built this city and give an entirely new look. Due to his rule, Faizabad attained prosperity and became a flourishing city. Nawab Shuja-ud-Daula built various magnificent buildings in the entire city to ensure that the city has amazing infrastucture. Each of these buildings was unique in its own way as they had special architectural designs. Constrution of these magnificent buildings attracted many tourists from all over the country and hence slowly this city flourished as one of the important business centre as well. As Nawab Shuja-ud-Daula was one of the major contributors for the development of Faizabad, a tomb in his memory was built. This tomb is known as Gulab Bari and was built in 1775. This has now become of the major tourist attractions in Faizabad.

Visit to Gulab Bari in Faizabad

All the people who are interested in knowing the history of the place or really value the rich culture heritage of the country should definitely visit Gulab Bari. This place is also an attraction for photographers. Due to its landscaping of beautiful flowers around the tomb, this place becomes one of the main places for tourist to capture the beauty of the tomb.

How to Reach Gulab Bari in Faizabad

You can visit this marvellous place anytime during the year. It is open throughout the year. The timings for this tomb are from four in the morning till seven in the evening.

A visit to this tomb would ideally take about one and half to two hours. Each sections of the tomb are uniquely built and if you have time do not miss to inspect each of the sections of this magnificent tomb.