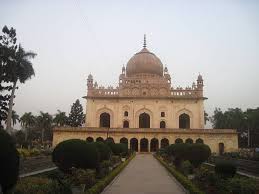 Faizabad or popularly known as City of Saket was the first capital of Nawabs of Awadh. Due to the prolonged Nawabi rule in Faizabad the city has various worth seeing monuments which are constructed by the Nawabs. Nawabs like Saadat Khan, Safdar Jang, and Shuja-ud-daula during their rule took interest in developing the city. They were the ones who made this city a place worth visiting. They made beautiful buildings, gardens and many more such things. So, if you are in Faizabad, here is the list of places you should visit.

Gulab Bari is a tomb of Nawab Shuja-ud-Daula, the third Nawab of Awadh. Gulab Bari means ‘Garden of Roses’. Gulab Bari has an amazing collection of various roses which are beautifully displayed at the side of water fountains in picturesque manner. People interested in photography will surely not want to miss this beautiful tomb.

Click Here to Read More on Gulab Bari in Faizabad

Bahu Begum ka Maqbara is a tomb of Begum Unmatuzzohra Bano or popularly known as Bahu Begum. Bahu Begum was wife of Nawab Shuja-ud-Daula. This maqbara or tomb is considered as one of the finest buildings of its kind in Avadh Empire. The building is an excellent example for creative architecture and brilliance. It was built by Begum’s chief advisor Darab Ali Khan at the cost of three lakhs rupees.

Guptar Ghat is situated on the banks of river Sarayu. According to the mythology, it is believed that Lord Rama drowned himself or went for ‘Jal Samadhi’ in the river and left the earth for ‘Vaikunth’. Various temples like Raja Mandir, Chakra Harji Vishnu Temple are situated on this Ghat.

Company garden is also known as Guptar Ghat garden. The garden is near Guptar Ghat and is open to public from 5.00 am to noon and then from 4.00 pm to 9.00 pm. The garden is well maintained with considerable amount of landscaping and also has a temple of Mari Mata inside.

Ghanta Ghar means ‘house of the clock’. It is a huge tower situated in the middle of the city centre. This building acts as the main point of Faizabad as all the distances within the city are measured from this tower. Also known as main chowk, this area serves as a main market area for vegetables and spices.

Shringi Rishi Ashram is located on the river bank of river Saryu. Here the Samadhi of saint Shringi and his wife Shanti Devi are located. The ashram is known for its historic significance. It is believed that in ancient days, saint Shringi had performed Putrakamakshi Yagya which means a sacred pooja for a male child for King Dashrath. After this Yagya or pooja king Dashrath was blessed with sons.

This temple is situated in the cantonment area. The temple is maintained by military people and is beautifully crafted. There are idols of various deities in the temple. A feeling of calmness and serenity is experienced in this temple.

Faizabad museum is one of the major tourist attractions in Faizabad. If you are really interested in history then this is the place you should not miss. The museum has a wide variety of historical and mythical things on display. A visit to this well maintained museum not only will allow one to see and understand the history and culture of the city but one can also see the life of the people of Faizabad centuries back. Utensils, cutlery, war weapons, silverware day to day items used and many such things are there on display. This is one of the must visit sites in Faizabad to know the history of the place.